My Top Ten Toronto Sporting Moments of the Decade

The decade is coming to a merciful end and believe it or not, that means people have a deep-seated compulsion to create lists.

I marvel at these best of/worst of lists mostly because I honestly can't remember a single movie or television show that I watched back in 2010 that would provide any relevancy to anybody today. I can't even remember what I watched last week so why would I pretend to find hidden understanding and share some perceptive insight into what I thought about The Leftovers, Fleabag, or Killing Eve, shows I watched several years ago but can't recall enough details about to make a list worthwhile. So, an end of decade list of TV shows or movies was dismissed by me out of hand.

I did, however, give some thought to the best of Toronto sports experiences of this past decade. There are several reasons for my compiling this list.

1. Toronto is traditionally a really sucky place to be a sports fan. We spend more time than almost any other city in North America yelling "Wait until next year", and frankly it gets old fast. But, this decade has been different and offered not just hope, but extended periods of actual ebullience. I felt it was time, as a long-suffering Toronto sports fan, to offer up some real remembrance of the thrill of victory rather than of the agony of defeat.

2. Sports bring people of all types together in a common pursuit. Over the last ten years, Toronto has seen the rise of collective cheering locales like Maple Leaf Square and Jurassic Park; places where dedicated and devoted fans can come together and cheer or commiserate with total strangers. Even regular-season games have become community events like no other, and they have brought a diverse city together for something tremendously positive.

3. There has been so much shit in these teen years of the twenty-first century that a bit of reliving the good and exciting can't be a bad thing.

And so, without further delay, I offer up Toronto's Best Sporting Moments of the Past Decade.

10. The Toronto Raptors hire Masai Ujiri (2014) I should say they re-hired him as he had previously been employed by the team as a backroom employee but after a stint with the Denver Nuggets, the Raptors brought him back to be their general manager and now president. His steady hand and clever signings and trades have made the Raptors....well....we will get to that soon. Basketball has become a city-wide phenomenon in a traditional hockey town and most of that is due to Ujiri, his youth outreach, involvement with the community, and basketball acumen. Suffice it to say, that without Ujiri, 2019 doesn't happen for the purple dinos.

9. The Toronto Maple Leafs hire Brendan Shanahan (2014) It was almost as if MLSE had an epiphany in 2014 and realized that losing really does suck so let's bring on the experts to run the joint. Hall of Famer Shanahan finally returned home to run a miserable Leafs team that was going nowhere under Brian Burke. He had a plan, a Shanaplan, to lift the Buds out of obscurity and return them to prominence. He re-engaged with the fans, the alumni, and the city. He finally retired the appropriate sweaters and brought back the history. He spoke straight to the fans when he promised pain before glory and the city has, for the most part, bought into it. No Cups yet but a little luck of the Irish didn't hurt him when he won the draft lottery and was able to select...

8. The Toronto Maple Leafs select Auston Matthews (2016) In the history of the draft, the Leafs had only one other first overall pick, Wendell Clark. The ability to select a powerful centre and goal-scoring savant has accelerated the Shanaplan by several years. The Leafs made the playoffs in Matthews' rookie season and the city went wild. He isn't there yet, but the man can flat out play and his presence, along with those of the flying kids Mitchell Marner, William Nylander, and goalie Frederic Andersen have made the Leafs contenders. Their defence is still suspect and they take too many periods off, but these kids can play. It also didn't hurt that the growth of the younguns led to...

7. The Toronto Maple Leafs sign free agent John Tavares (2018) It is very rare that a player of Tavares' calibre becomes a free agent in the prime of their career. It is even rarer that a Toronto boy wants to come home and play for the Leafs, so when Tavares signed in the summer of 2018, the city was incredulous. In his first season for the Blue and White, he scored 47 goals and became the stabilizing force in the dressing room they needed. It wasn't a surprise when he was named team captain this fall. It would be delirium and bedlam in the city if Tavares ever gets to hoist Lord Stanley wearing the Leaf on his chest.

6. The Toronto FC wins the MLS Championship (2017) I am not much of a soccer fan but I am gradually learning the game. The fanbase in our city is robust and devoted. Thousands show up for every game at BMO field and they went absolutely apeshit when they won the championship. The Toronto Argos won two Grey Cups in this decade and could only wish they had half of the people show up to their games as does FC.

5. The Toronto Blue Jays trade for Josh Donaldson (2014) This was a good old-fashioned baseball trade. The Jays traded Brett Lawrie, Kendall Graveman, Sean Nolin, and Franklin Barreto to the Oakland A's for the power-hitting third baseman. Donaldson slotted seamlessly into the number two spot in the lineup, ahead of Jose Bautista and Edwin Encarnacion and created magic. He promised the rain and he brought it. The Jays added a few more pieces at mid-season that propelled them to the AL East title (Troy Tulowitzki, anyone?) but it was the acquisition of Donaldson that was the catalyst. His 2015 season won him the league MVP and his four years in Toronto are amongst the best in team history.

4. Bianca Andreescu wins the United States Open (2019) Ok, technically she is from Thornhill via Mississagua but we will claim her anyway. The nineteen-year-old phenom has had a year to remember. She not only beat the legendary Serena Williams to claim her first grand slam title but she also won two other important titles this year, including the Canadian Open. She is the first Canadian to win her home country tournament in fifty years. She has risen to number four in the rankings, the highest ever for a Canadian tennis player of either sex and she just won the Lou Marsh Trophy (Canadian athlete of the year) unanimously. Not bad for a girl not yet out of her teens.

3. The Toronto Raptors trade for Kawhi Leonard (2018) This trade was franchise-defining. Not only did the Raptors not know if the Kawhi they were trading for was fully healthy but they traded the face of their team, DeMar DeRozen, to get him. They also knew that they were probably getting a "one and done" season out of their newly acquired superstar but took the risk and hoped for a big payoff. Masai Ujiri had balls of steel to make that trade and it was the biggest deal of the decade for any Toronto sports franchise.

I went back and forth for an hour trying to decide between this iconic moment and number one but what clinched it for me was that this led to the Jays moving on to the ALCS and they ultimately lost that series to Kansas City. That said, you have to remember what happened just before Bautista hit this bomb. There was that weird-ass play in the top of the inning where Russell Martin messed up. With two outs in the seventh inning and the game tied at 2, Rangers second baseman Rougned Odor led off third. Texas right fielder Shin-Soo Choo, a left-handed hitter, faced Toronto reliever, Aaron Sanchez. Choo took a 1-2 fastball for a ball and, as baseball’s new speed-up-the-game rules mandate, stayed in the batter’s box. Harmless stuff. Choo did, however, tilt his bat and his hands back over the plate just as Martin lobbed the ball back to Sanchez. Martin’s toss hit Choo’s bat. It squirted toward third base. Odor came home with the go-ahead run. The game was delayed for twenty minutes while the umpires tried to sort out the mess. The Dome went nuts when Odor was awarded home, so Bautista's 3-run shot was clutch and has to be framed in the context of the mess that happened before. It would have been my number one until this happened.

This was the most unbelievable shot I have ever seen. That it was game seven in the second round and wasn't even what won them their championship, speaks volumes as to how important it was. Murals are still up around the city depicting it. The Raptors winning the first major sports championship in Toronto in twenty-six years was the icing on a delicious sporting decade. The city came out by the millions to fete their heroes. (I know. I was in the middle of the parade throng.)  There were few hard feelings when Kawhi bolted back to L.A. to play for his hometown Clippers. He did as promised. He made our city feel whole again for a brief moment in time.

This photo will go down in Toronto sporting lore for all time. This is how we show our love up north. (Photo by Frank Gunn of Associated Press) 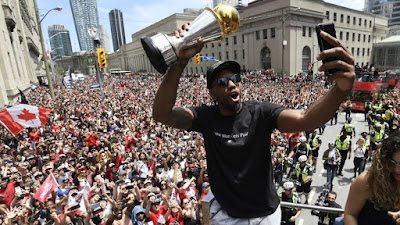 Happy new sporting decade, Toronto. Let's hope it's even half as exciting as the last one.
Posted by Dawn at 17:08