Looking for the Perfect Hamentaschen 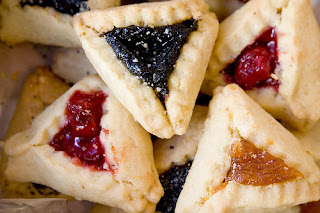 Last year at this time, some friends and I embarked upon on a search throughout some local North Miami haunts for a decent hamentaschen. Given that it was Purim and we were in no mood to bake for ourselves, we thought that the local Jewish community could come up with some reasonable facsimile of what we were used to at home. Boy were we ever wrong. The stuff we eventually settled on had a distinct institutional flavour of cardboard and oil based products. The fillings were bottled jam and the mohn (poppyseed) was starchy. Suffice it to say we were tremendously disappointed.

This year the Reform Judaism blog has started the Great Hamentaschen Debate asking those willing to state their preference for their favourite Hamentaschen fillings. While I have definite ideas about this question-mohn is yucky, fruit based are heaven-I am more inclined to believe that the real art of great hamentaschen is less about the filling and more about the dough. So, dear readers I am asking you to share. Do you have a favourite hamentaschen recipe? Are you more inclined to cookie dough or yeast doughs? Oil or butter? I hope that you won't mind sharing Bubby's ancient family secrets with the blogosphere, because frankly I am sick and tired of commercial bakeries thinking that they can do it better than we can. Please post your favourite recipes in the comments section below and I will post them to share. Hamentaschen lovers of the world unite. Be happy! It's Adar-again!
Posted by Dawn at 14:12

Email ThisBlogThis!Share to TwitterShare to FacebookShare to Pinterest
Labels: Judaism