Who Wants to Be A Millionaire?

I am not a big fan of game shows. I really never have been. With the glaring exception of Jeopardy, (which I frankly do not consider a game show, but rather an intricate exercise of mind and mensa that combines the intellect and skill necessary to find true wisdom) I simply cannot get excited watching others spin a wheel, open a suitcase or guess the retail price. When the boys were very young, the husband's grandmother would watch them for a couple of mornings a week, while I attempted to maintain some semblance of a career. She got Older Son hooked on The Price is RIght. (She was a huge fan of Bob Barker!! I think that she secretly wished that he was Jewish so that there could be something more between them other than a passing glance ever weekday morning at 11:00 am.) To this day-every so often-I will catch him , sneaking a peak at Price when he thinks that nobody is watching. (When Bob retired last year, Older Son made it appointment TV to watch his final broadcast!) I know that this is one of the ways he remembers her. But me? Not so much. Some of that changed this past week. Watching a game show becomes an entirely new experience when there is someone that you know on the show as a contestant.

This past Thursday, the husband and I had such an experience. A friend of my parents from the sunny south made an appearance on Who Wants to Be a Millionaire? with Meredith Viera. This lady called to inform my folks that her day was fast approaching and she wanted all she knew and all who knew her to tune in and, if possible, record the program for posterity. How could we refuse? So at 5:00 pm on Thursday afternoon, we set the satellite for CKVR in Barrie and got ready to cheer her on. She was a pistol. She whipped through the first level of questions as though her pants were on fire, yet she never appeared smug or condescending. With all of her lifelines intact, she moved quite rapidly into interesting money territory. Meredith slowed the action down a bit to inquire as to what her plans for some of the cash might be. Mrs. V declared that she used a golf cart to tool around her retirement community, and she would really like to "pimp out" her vehicle. The husband and I were in stitches!! We cheered each correct answer as if Joe Carter had re-hit his home run! Finally, she hit a snag. It was an art question. I was almost on my hands and knees in front of the TV, pleading for her to use me as her "phone-a-friend", as I knew the answer. (Apparently, Canada is not considered as a viable area code!!) When all was said and done, she walked away with----$25,000!!! WOW! It was a magical way to spend a half an hour. Check out the photo of the aforementioned golf cart!! Way to go Mrs V.! 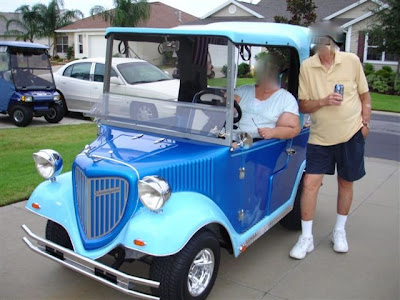