He's a Tortoise, Not a Turtle!

One of the things I have been most amazed at during this trip has been how comfortable all of the animals, whether they be fish, fowl, or reptile, are amongst their human invaders. We were duly warned about keeping a two-metre distance at all times from any wildlife but apparently, the fauna failed to receive the memo. They have been almost as inquisitive about us as we are about them and they can't seem to figure out what all the fuss is about. Sea lions wander into our paths; small birds land on our cameras; sea turtles fornicate within centimetres of our legs; and the great-granddaddy of them all, the giant land tortoises never retract into their shells when they see us coming.

If there is a zoological mascot of these islands, it has to be the tortoise. These gentle giants have inhabited the highlands of Santa Cruz for thousands of years and they are still roaming the grasslands in search of appropriate mates and a decent meal. The tortoises can live for upwards of one-hundred years and some far exceed that number. Unfortunately, their numbers are decreasing. At one time there were fifteen individual species of Galápagos land tortoises but their numbers have diminished with the extinction of four of those. The most famous, of course, was the last of his kind known to the world as Lonesome George. George was adopted by the Darwin Centre in Santa Cruz and every attempt was made over a period of twenty years to try and get him to mate with a species that at least closely resembled his DNA. Unfortunately, George was having none of it and was determined to exit this earth as the end of his line which he did in 2012. The Darwin Centre has preserved George and frankly, seeing his taxidermied pose was unnerving. The centre is doing yeoman's work with an extensive breeding program and in its attempts to rescue injured tortoises. The centre then releases its charges back into their natural habitats when the animals are ready to fend for themselves.

And that is where we spent our final day in Galápagos. We trekked up into the wet highlands, strapped on somebody else's rubber boots (ew!), and wandered through the grassy and very muddy farmlands where the tortoises are hanging out in large numbers right next to cattle. Like their sea turtle cousins, the tortoises have a problem producing equal numbers of males and females due to the oddities of climate change and temperature fluctuations. There are far more males up here than females so natural breeding isn't always possible, hence the intervention of the Darwin Centre. We were able to get up close and personal with these land giants and they couldn't even care one whit about our being there. It was truly a lovely way to spend our last moments in their homes.

This trip has been filled with magic. I have run out of superlatives to describe our experiences. If anybody is interested in having a more in-depth conversation, do not hesitate to reach out offline. This trip has been years in the dreaming. Sometimes, it is fun to live your dreams.

I promise to stay off of social media for the next little while so that your feeds can recover. Thanks for coming along for the ride. 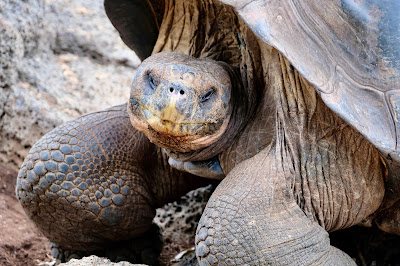 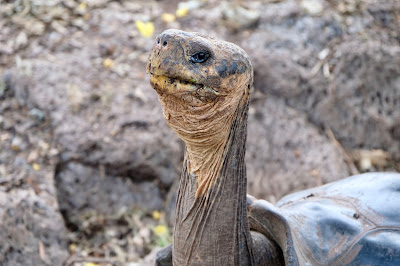 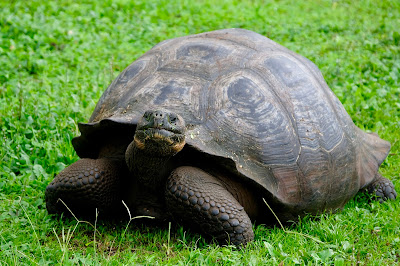 *The title of this post is so named because of a really irritating guy on our tour who kept asking questions about the "turtles". I was ready to scream at him, "they're tortoises, you Cliff Clavin wannabe." I'm definitely at the end.
Posted by Dawn at 18:05