My body is Healthy if not Perfect!

It has been too long since I have taken to the keyboard to write in this space. Chalk it up to writer's block with a hint of daily busyness. In any case something tweaked my sense of justice today that I felt was just screaming for a response. And you know me, I am never shy with my responses.

Last week actress Ashley Judd published an essay in The Daily Beast that was mostly a response to some fairly ugly media coverage about her appearance. While I agreed with most of what she said about the greater conversation that is constantly being had concerning women's bodies and the impossible and ridiculous images that we women are often forced to live up to, it struck me as just a wee bit disingenuous that a celebrity who has traded on her appearance for most of her career in order to further that career was pushing this important and necessary agenda forward. That said, I do think that most of what Ms. Judd railed against in her essay is just and valid. We women are held to unwieldy and impossible standards when it comes to our appearance, and the fashion industry, media outlets, advertising agencies, and others are complicit in this nightmare.

We fast forward to yesterday, where here in Toronto the mayor was conducting his weekly weigh-in. This mayor has struggled mightily with his poundage and while I disagree with the man on just about every policy issue he has, I can readily identify with his battle against the bulge. I commend the man for attempting to get healthy and, speaking as one who has spent a lifetime dealing with weight issues, I share his pain every single week when he publicly gets on that scale and stalls or gains a pound. Yesterday in the heat of the weigh-in two protestors from PETA crashed the party in an attempt to convert "hizzoner"to a vegan lifestyle. 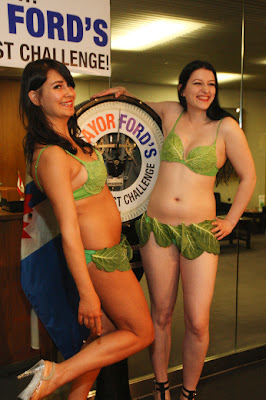 Now I need to make it perfectly clear that I hold absolutely no love for PETA. As a vegetarian, I cringe every single time these crazy people try and speak for me and mine. In my opinion, this is an organization that seems to trip over its own tongue whenever it attempts to advance its single issue agenda. This publicity stunt was not well received by the mayor, the press, or much of the citizenry of Toronto. If we want to have a debate about PETA and their mission and the flawed messages that they attempt to impart, I am willing to have that discussion. What I am not willing to engage in is image bashing like that of one of my Facebook friends this morning that basically trashed the two young women's appearance and body types as evidence that their vegan lifestyle is a hoax. This type of crude attempt at humour is exactly of the kind that Ms. Judd was exploring in her article. When does it become okay to call out these crude responses for that which they are-neanderthal and misogynistic attempts at humour that disparage women.

What if I had used disparaging language to describe the mayor's body type in speaking about my opposition to his flawed policies? Isn't that just as disgraceful as my Facebook friend's comments about these women and the organization they represent? Until we can engage in civil debate about our differences without bringing body and appearance  into the fray, we will never be able to move the dialogue forward and have a healthy debate about the issues which Ms. Judd advocated.